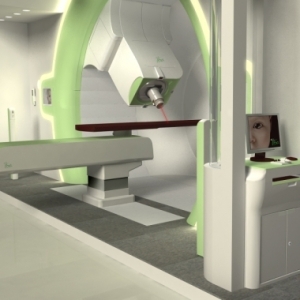 In 2014, there were 141 operational proton therapy treatment rooms globally, but by 2019 that number will jump to 330, according to a new MEDraysintell report. In addition, the proton therapy world market is expected to hit $1 billion by 2019.

“There is a growing [amount] of clinical evidence regarding the efficacy of proton therapy, that will progressively be used to treat a broader number of indications,” Paul-Emmanuel Goethals, co-founder of MEDraysintell, told DOTmed News. “In addition, the emergence of lower-cost/compact PT systems, is allowing more centers to be installed.”

The high cost of the systems was the main hurdle that stood in the way of widespread adoption of proton therapy technology. To solve that, almost all of the proton therapy manufacturers offer or are developing compact proton therapy systems.

Today, 15 manufacturers make up the proton therapy market and in 2019 five of those companies, including Varian and IBA, will comprise 70 percent of the market. Among the companies, there is also an interest in carbon therapy — IBA and Toshiba recently partnered to promote Toshiba’s carbon therapy solutions outside of Japan.

The global particle therapy devices market, which is mostly composed of proton therapy devices, was worth $100 million in 2000 and grew at an annual growth rate of about 15 percent from 2000 to 2014. By 2030, the market is anticipated to reach anywhere from $3.5 to $6.6 billion with 1,200 to 1,800 particle therapy treatment rooms in operation.

However, by 2019 only 1 percent of the population that requires some sort of radiotherapy will be able to receive proton therapy because of the limited number of proton therapy facilities that will be installed globally by then, said Goethals. “Therefore, there is still much room for further growth,” he added.