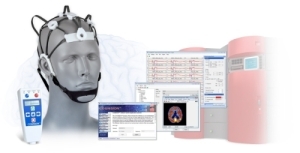 The COGNISION System
Courtesy of Neuronetrix
Neuronetrix announced on Friday that its portable electroencephalogram (EEG) system, COGNISION System, received FDA approval. It's used to measure the electrical brainwaves of patients with neurological issues including Alzheimer’s, concussion, schizophrenia and ADHD.

The system can perform both standard EEG tests and a non-invasive test called auditory event-related potentials.

"Mobile neurodiagnostic devices offer great promise to enhance the objective assessment of a patient's cognitive and neurological status at the point of care,” Dr. Murali Doraiswamy, of Duke Institute for Brain Sciences and a scientific advisor to Neuronetrix, said in a statement. “Neural markers closely tied to cognitive status can also accelerate drug development for a variety of brain disorders.”

EEG tests are traditionally conducted by specialists in hospital electrophysiology labs but primary care physicians can now perform those tests with COGNISION during a routine visit. The company claims that the system is easy and inexpensive enough for private-practice physicians to use.

Neuronetrix is currently marketing the system to Alzheimer’s and memory disorder clinics as well as physicians' practices that specialize in age-related dementias. The company has also been marketing the test to be used in clinical trials.

To date, Onnit Labs has used the system in its clinical study involving Alpha BRAIN and has reported positive results. The system is also being used in an Anavex Life Sciences study investigating the effects of a new therapy on Alzheimer’s patients and a Quillen College of Medicine study researching HIV-associated neurocognitive disorders.