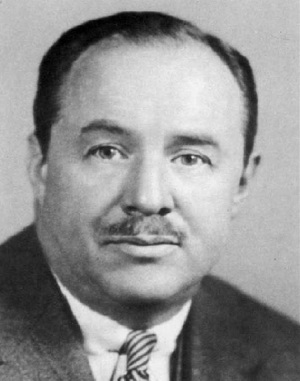 Today, you can walk into any major pharmacy during flu season
and get vaccinated against influenza. We can thank Dr. Thomas Francis Jr. for making that possible. He was the first American to isolate the influenza virus and develop the vaccine.

Francis was born in Indiana on July 15, 1900. He grew up in Pennsylvania, attending Allegheny College on a scholarship. In 1925, he received his medical degree from Yale University. Upon graduation, he joined the Rockefeller Institute, where a prominent team of researchers was working on a vaccine against pneumonia. But Dr. Francis decided to focus on influenza instead.

In 1933, he married Dorothy Packard Otton and had two children. He joined the faculty of the New York University College of Medicine, where he served as professor of bacteriology until 1938. That year, he was invited to join the new School of Public Health at the University of Michigan.

The invitation to join the School of Public Health came at a serendipitous time – Dr. Francis had just been appointed the head of the Commission on Influenza of the Armed Forces Epidemiological Board. The 1918 influenza pandemic was still fresh on everyone’s mind (it took the lives of more than 40,000 U.S. servicemen), and the military was looking for a way to prevent another outbreak. Dr. Francis was well aware that any recommendations or policies he set on influenza for the military would most likely also be adopted by the U.S. Public Health Service.

Once he got to Michigan, Dr. Francis established a virus laboratory and a Department of Epidemiology that focused on a variety of infectious diseases. When a flu outbreak hit Puerto Rico, Dr. Francis saw an opportunity. He considered getting on a boat and traveling to the island to get a sample of influenza himself, but he wasn’t sure if the virus would survive the long trip. Instead, he came up with a different strategy that proved to be successful. Just weeks before, another scientist demonstrated that a mixture of saline solution and glycerin can be used to safely transport a virus strain; so Dr. Francis applied the same technique to the flu, asking his colleagues to collect specimens from patients who exhibit influenza-like symptoms. By the time the bottles made it back to Dr. Francis, the virus was alive and well.

Dr. Francis didn’t only isolate the influenza virus but also proved that more than one strain of it exists. He successfully developed the “killed-virus” vaccine, the kind of vaccine that plants a dead virus in the system to enable the body to build immunity to it. He performed multiple experiments on ferrets before testing the vaccine on human subjects, growing the virus in minced chick embryo culture. The military proved to be an excellent place to carry out the experiment, as a substantial number of subjects were available. The vaccine proved to be safe and effective.

Given his success with the flu vaccine, in 1953, he was asked to design and supervise the field trials of a polio vaccine, which was developed by his protégé Jonas Salk. He insisted on a double-blind study – neither the patients nor the clinicians administering the vaccine knew if they had the vaccine or the placebo. Approximately 1.8 million children from more than 200 areas around the U.S., Canada, and Finland participated in the trial. In 1955, Dr. Francis announced that the trial was successful and deemed the polio vaccine to be “safe, effective, and potent.”

Dr. Francis died on October 1, 1969 in Michigan. He received many awards and distinctions throughout his career, including the Medal of Freedom from the U.S. Army. He was also elected to the Polio Hall of Fame for his major contributions to polio work.