From the July 2014 issue of HealthCare Business News magazine 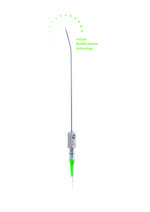 The navigated FlexPointer has been well-received in Europe as an instrument that permits surgical sinus intervention without the need of exchange during the surgery. The Pointer is inserted endoscopically assisted and indicates the current position. The FlexPointer is navigated at the tip of the instrument and can be intraoperatively adjusted by bending it.

The navigated FinePointer is designed to support skull base surgery for ENT access.

Acertara Acoustic Laboratories to Introduce Active-Z
Acertara Acoustic Laboratories recently introduced the Active-Z, a low cost hand-held ultrasound probe testing device that provides biomedical engineering professionals with a point-of-measurement tool to rapidly and easily diagnose a suspected defective probe. Using a proprietary swept frequency technique, a broadband signal is transmitted through a patent-pending stylus into one of the pins of the probe connector; Active-Z then receives the returning signal through the stylus and measures the resultant complex impedance of the connection between the probe connector and the acoustic stack within the probe housing. This technique allows the user to determine where a potential problem exists.