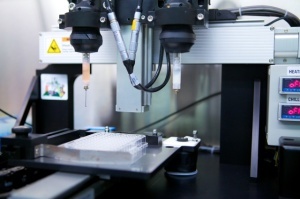 One of the holy grails of medicine — implanting major organs created from a patient’s own cells — may be many years away, but 3-D printing technology is already being used to create functional human tissue and bone-like implants, along with life-saving treatments and tools used in surgery.

It goes well beyond the guitars, guns and other colorful objects often used to illustrate the recent 3-D printing boom.

According to the 2013 Wohlers Report, a review and analysis of the 3-D printing industry worldwide, $361 million of the more than $2 billion in revenue the industry generated in 2012 came from 3-D printing for medical and dental uses.

There are two major types of medical 3-D printing. One type, bioprinting, uses a combination of hydrogels and human cells to build tissue in a specific shape, layer by layer, while the more traditional process of making solid 3-D objects from a digital blueprint is used to create everything from orthopedic implants to hearing aids.

San Diego-based startup Organovo, which grew out of discoveries made at the University of Missouri, has been working on the bioprinting side, using a proprietary 3-D printing process to make functional human liver tissue that pharmaceutical companies can use to test toxicity. While the small strips of liver tissue the company prints don’t have all the anatomy and function of implantable tissue, they provide much more precise results than the two-dimensional cell cultures companies use to test drugs during the early stages of development, says Michael Renard, Organovo’s vice president of commercial operations.

Testing with 3-D tissues can give the pharmaceutical companies more precise results and let them make smarter decisions about investing more in costly clinical trials.

“It would be very advantageous to add that human liver model into their lab testing as a way to give them greater confidence to make that decision to go into humans and spend more money,” Renard says.

The company’s longer-term goal is to use the technology in patient care, developing tissues from a patient’s own cells that can be used in direct surgical therapy: things such as heart muscle patches, nerve grafts, or blood vessels for bypass.

Printing kidneys
Dr. Anthony Atala, director of the Wake Forest Institute for Regenerative Medicine in North Carolina, is somewhat of a rock star in the regenerative medicine world. In a 2011 TED talk, he wowed the audience by showing off a kidney that had been printed backstage, based on a CT scan of an actual organ. Though the printed kidney could not actually filter blood, it was a glimpse at what is likely possible in the future.
1(current)
2
3
4