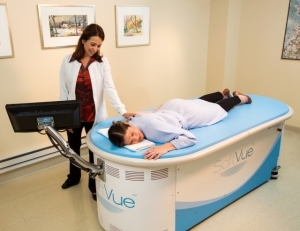 Patient during an exam
with SoftVue.
The market for breast imaging technologies just got bigger.

The device, called SoftVue, is meant to be a step above technologies that are used after screening mammography for diagnosis.

Ultrasound is one of a few follow-up devices to diagnose breast lesions, but there are some limitations that Delphinus researchers have tried to remedy with the new device.

"Where we have been successful is in recognizing that there are a number of things you want to minimize like radiation costs and operator dependence and other things you want to optimize like quantitative information and the speed of exam," Neb Duric, chief technology officer at Delphinus, told DOTmed News. "We think we've hit the nail on head in filling that unmet need."

The device has been in development for over seven years. Researchers at Karmanos Cancer Institute in Detroit spun off Delphinus Medical Technologies to commercialize the technology.

SoftVue's technology is novel in that it uses ring transducer technology to transmit and receive ultrasound signals. SoftVue is able to capture reflection echoes from all directions around the breast, and gather transmitted signals coming through tissue, in turn, imaging the entire breast.

"There are two ways to transmit ultrasound waves. One is by reflection and the other is transmission and ours combines both of those," Mark Morsfield, CEO of Delphinus, told DOTmed News.

The quantitative information that SoftVue generates is driven by the transmission and ultrasonic pulsing.

"Ultrasound has done well with dense breast tissue but the main problem is it's operator dependent, so it's difficult to image the whole breast manually and it also doesn't provide quantitative information so it leaves lots of false positives," said Duric. "On both those fronts we've taken the risk out of it."

Duric and his team also published a paper this year demonstrating that the device can measure breast density based on the results of 270 patients.

Studies have shown that women with dense breast tissue have a higher rate of breast cancer. But that does not necessarily equate with increased cancer deaths, according to an article from the Journal of the National Cancer Institute. Additionally, 13 states have passed breast density inform legislation where doctors are required to tell women when they have dense breasts. A federal breast density law is also making its way through Congress.

The exam using SoftVue is very short. It takes roughly one to two minutes per breast while the breast is suspended in warm water.

Aside from imaging dense breasts, future indications for the technology include predicting response to therapy.

Ultimately, researchers see it as a technology for screening and diagnosis.

"Eventually, this could be used to screen patients quickly and inexpensively, and if there's a need for a call-back, the patient can be imaged with same device," said Duric.