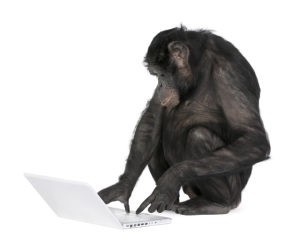 Chimps don't monkey around when it comes to brain aging — in fact, they might have an edge over humans. White matter, the "wires" connecting different computing centers in the brain, breaks down earlier in the human life cycle than in the chimp life cycle, a fact that may offer clues into human brain diseases like Alzheimer's, researchers at Emory University found.

White matter is made up of myelin, a fatty electrical insulator that coats neurons' axons. Myelin breakdown has been linked with cognitive decline in healthy aging as well as in neuro-degenerative diseases such as Alzheimer's.

The researchers used MRI imaging of white matter to determine at what age it begins to break down in chimpanzees, and compared those scans with images of human brains. Results showed that white matter integrity peaked at age 31 in chimps and age 30 humans. But 31 in chimp years is about 47 in human years.

"Researchers have never observed any obvious behavior signs of neuro-degenerative disease in chimpanzees," said Xu (Jerry) Chen, the first author of the study, to DOTmed News. "The MRI imaging offers us a great non-invasive tool for finding the underlying neuro-mechanics for this uniquely human phenomenon."

Diffusion-weighted imaging, the method the researchers used, detects directional differences in the ability of water molecules to diffuse. When myelin breaks down, water molecules in the brain can move more freely.

This was the first time diffusion-weighted imaging was used on chimps. A special analysis had to be done of the scans to account for the different structure of chimps' brains, Chen said.

Next, researchers will investigate why white matter deteriorates more quickly in humans in hopes of one day using that information to slow the process.