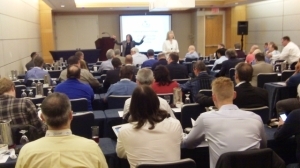 A session at
IAMERS' 20th anniversary
meeting.
Begun in the early 1990s after the Food and Drug Administration mulled regulating used medical imaging equipment dealers and refurbishers, the International Association of Medical Equipment Remarketers and Servicers marked its 20th anniversary at its annual meeting in Manhattan last week.

"We had a bad industry reputation," Diana Upton, president of the organization for third-party resellers and servicers, explained at the conference, which ran May 2 and 3 at the Crowne Plaza Hotel in New York, and in which she was re-appointed in her post for another term. "We were routinely compared to used car salesman."

In 1993, the group first convened under the leadership of Dave Band, IAMERS' founding president, in Chicago, and aimed to promote industry standards and ethical dealing. It also worked with the FDA to get dealers categorized as remarketers, sparing them from the regulations that were then on the table, and which would have put resellers of MRIs and X-ray devices under possibly heavy bureaucratic burdens.

"We'd have to do 510(k)s for everything we were selling," said Rick Stockton, IAMERS' membership chairman, referring to an FDA application process for medium-risk new medical devices.

The group, which now says it has about 125 member companies, said the industry still faces a number of challenges, such as the unique device identifier rule, a new system for tracking and labeling medical devices that could affect used dealers once it launches in a few years. Final UDI rules will likely be published in late July, Upton said.

Also, IAMERS said it wants to work on raising its visibility among clinicians.

"Less than 1 percent would know who we are in hospitals," observed Stockton, who's also the vice president of business development with Atlas Medical Technologies.

IAMERS is also re-establishing a Washington, D.C., working group to act on legislative issues. The next gathering for that will be in New Jersey on June 7, while the next IAMERS meeting will be held in Prague on Sept. 11 through 13.

"It's a great cocktail party and that kind of thing," Stockton said about the organization and its meet-ups. "But it's more than that for our future."