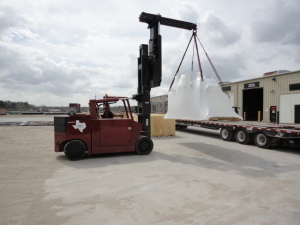 Many customers request shrink
wrapping rather than crating
to save money. Image courtesy of
MEI Rigging and Crating
When transporting medical equipment, all parties involved must keep their eyes firmly on the road, so to speak. One mistake can delay arrival, send cargo to the wrong destination or even damage delicate equipment. And there are plenty of complications that can get in the way these days, such as new national and international regulations, stricter and more expensive insurance requirements and more intense training for crews.

But qualified companies get the job done, and with so much practice dealing with last-minute demands and changes, it’s no wonder transport tends to be a steady sector that adapts well to twists and turns in the economy, too.

Some companies have needed to diversify business to stay profitable. Shadow Transport Inc., a Long Island, New York-based rigging, moving and transportation company specializing in moving large, sensitive equipment, has shifted focus to the medical world rather than graphic arts industry, where it has noticed a drop-off in moves of printing presses, cutting machines and bindery equipment. “At least here in the New York area, there will always be a need for medical upgrades, especially since the hospitals and imaging centers closest to us are some of the leading centers in the country,” says Samantha Williams, vice president of operations for the company.

MEI LLC in Texas has also seen growth, though J.D. Silvers, sales manager, says offices in other parts of the country have experienced varied levels of success in business.

Ambrose Rigging, meanwhile, has seen some parts of its business drop while medical has stayed reliable. Brandon Transfer, a company specializing in crating and rigging, says it’s considerably ahead of last year’s numbers in the medical field. “We’ve especially had more overseas work,” says Steve Lewis, president of the company.

The economy has been a mixed bag for Estes Express, a national and international LTL (less than truckload) carrier. Account executive Duff Law says more companies are using the company because they do not have enough products to fill an entire truck. However, he says business has leveled out in his company’s third quarter. “While we have lots and lots of customers, those customers who last year were shipping 20, 30 or 40 shipments a month now are shipping five or six,” Law says.

Roadblocks and regulations
For the transport industry, rules of the road are constantly in flux. Last year, new driver hour laws went into effect, limiting drivers to 11 hours of driving after 10 consecutive hours off-duty. There was talk of that rule changing again this year, but the Federal Motor Carrier Safety Administration could not demonstrate that a 10-hour limit would be more beneficial to public safety than an 11-hour limit.
1(current)
2
3
4
5

Beaumont to merge with Spectrum