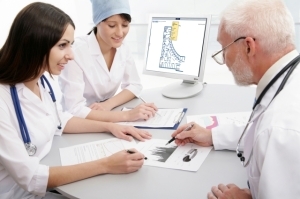 Floor-level view of all tagged
assets, patient and staff.
Courtesy of Awarepoint
From the October 2012 issue of HealthCare Business News magazine

The Department of Veterans Affairs, which earned its reputation as a health IT pioneer when it adopted electronic health records for all its medical facilities in the1980s, is embarking on another ambitious project to improve care for veterans. This summer, the VA announced a five-year contract deal with HP Enterprise Service for the implementation of a real-time location system in each of its 152 hospitals.

“RTLS is still a very young industry and we’re having trouble finding any comparison to past industries where someone has made this much of a statement about how important RTLS is for success,” says Marcus Ruark, vice president of Intelligent InSites. His company will provide enterprise-wide software for the various RTLS hardware systems at the VA sites.

Although it’s a young industry, initial feedback has been promising. According to a 2011 KLAS study, 95 percent of responding hospitals— which ranged from facilities with 25 beds to large IDNs—cite RTLS as a source of operational efficiency gains.

Traditionally, RTLS has been used to track assets, and according to the hospitals that use the technology, they produce a quick return on investment and even more cost savings down the road. But RTLS is not only proving to be economical for facilities, it’s also driving patient safety and patient satisfaction —metrics that are slowly being linked to dollar signs under health care reform.

While details are still being worked out for the national VA roll-out, RTLS implementation for the Midwestern region of the VA health care system (VISN 11) is already underway. All VISN 11 facilities are slated to be up and running with RTLS asset tracking by 2013, according to Debbie Elgot, portfolio manager for RTLS solutions for federal healthcare at HP.

“We’re doing a phased-iterative approach. So we have all medical centers somewhere in the process, starting with Ann Arbor [Michigan], which is the furthest along with some of the use cases—including tracking of medical supplies in the cath lab,” says Elgot.

Already, the facility in Ann Arbor has seen encouraging results. In one instance, it was able to locate infusion pumps within minutes of receiving news about a recall. “Without the system it would have taken days,” says Elgot.

Tracking assets and saving money
Ann Arbor hospital wasn’t the only one making use of RTLS for equipment tracking. Ellis Medicine, a hospital system in upstate New York, was also having trouble tracking and controlling its large inventory of infusion pumps. So when it decided to implement GE Healthcare’s AgileTrac asset management system in 2009, that’s the first equipment it zeroed in on.
1(current)
2
3
4