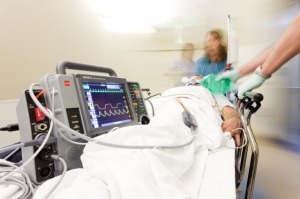 A few years ago, Redmond, Wash.’s local fire department received some discouraging news from the county medical director. They were told their service had a recorded CPR compression hands-on ratio of 66 percent—the lowest in the entire county. They knew about the data emphasizing increased compression time to increase resuscitation, so they quickly went to work on a performance improvement plan using new defibrillators they recently purchased from Physio-Control.

After resuscitation, Physio-Control’s LIFEPAK 15 defibrillator would transmit data via high-speed modem through Physio-Control’s LIFENET System to the CODE-STAT database at Redmond Medic One. The system would then send an alert to the smartphones of paramedics designated as “annotators” to let them know they had a case to review. “By the time [responders] got back to the station, they had instant feedback,” says Cam Pollock, global marketing vice president at Physio-Control.

After six months testing out this new feedback system, Redmond Medic One received more news from the county medical director. Their CPR compression hands-on-ratio was now the highest in the country at 83 percent.

“It improved over 20 points in six months, just by feeding back their performance on a quick basis,” says Pollock.

Improving patient outcomes through data
The American Heart Association updates its guidelines for CPR and ECC every five years. The most recent update, from 2010, highlights the need for good data.

“You can’t improve what you can’t measure. If you want to improve patient outcomes, you have to have a good way to collect and analyze,” says Pollock. The LIFENET system is cloud-based and connects to all of Physio-Control's products. Out in the field, not only would the device be able to feed back data to a local station to help paramedics improve their skills, but it could also send data to a local hospital in order for adequate preparations to be made for the patient’s arrival.

Recent AHA guidelines also urged high-quality compressions during CPR, specifically two inches of depth compression and at least 100 compressions per minute. But anyone who has ever performed CPR knows this is hard to maintain.

“Having a device deliver that instruction to the user for CPR is equally as important as the shock in my opinion,” says Ben Wellons, president of eMed Healthcare, a defibrillator distributor based in Little Rock, Ark.

CPR solutions
The top makers of defibrillators all incorporate several pieces of equipment and software that provide direct feedback to users to improve CPR numbers.
1(current)
2
3
4