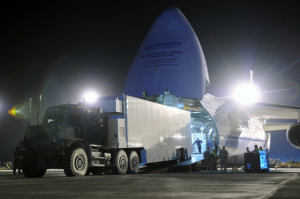 A Ukrainian super-cargo plane arriving at Camp Bastion in Afghanistan in the early morning darkness on Oct. 5 made a little bit of history: it was carrying the first MRI system ever deployed to a war-zone.

The mobile unit was one of two Philips Healthcare MRI systems delivered to Afghanistan earlier this month as part of what the Navy touted as an "unprecedented" logistical undertaking.

The unit that arrived in the Antonov AN 124 weighs, with its accessories, more than 35 tons, and is destined for a NATO Role 3 hospital in Camp Bastion, a British-controlled base in the restless Helmand Province, home to some of the theater's fiercest fighting. Another unit, which came Oct. 7, was set up in another Role 3 hospital in Kandahar.

Both systems, specially designed to endure the rigors of field operations and the harsh climate, are undergoing final testing and installation, the Navy said in a release.

Beginning in January, Naval Medical Logistics Command started the acquisition process, and was able to procure the units in about seven months, about half the 12-18-month time for typical MRI procurements, the Navy said.

"The fact that our team was able to design, acquire and deliver this new capability to the battlefield in less than 12 months is a testament to the commitment and creativity of the joint medical and logistics teams," Navy Surgeon General Vice Adm. Adam M. Robinson Jr. said in a statement.

The interior of a Philips-made
1.5-Tesla Achieva MRI
unit, one of two getting
installed in Afghanistan.
(Credit: Royal Air Force Photo/Sergeant Mitch Moore)


The driving clinical need for the MRI close to combat operations is to help diagnose head injuries, which the Department of Defense and the Veterans Affairs office have estimated account for nearly one-fifth of all combat casualties in Iraq and Afghanistan.

"The majority of Marines who suffer mild concussions recover without further therapy, but this machine will help us find out why a category of Marines don't seem to recover as quickly," Capt. Jeffrey W. Timby, a surgeon at Camp Leatherneck, a Marine base linked with Camp Bastion, said in a statement.

Previously, the nearest MRI for injured soldiers was almost 3,000 miles away, in a U.S.-run hospital in Germany.