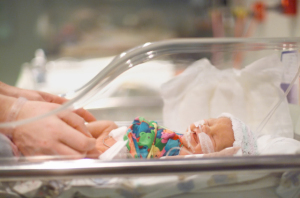 From the May 2011 issue of HealthCare Business News magazine

Rebecca Ava Rabinowitz was born four weeks premature on July 13, 2006 and released less than a week later. But in the days that followed, the infant repeatedly returned to the hospital.

Rebecca’s parents noticed she was lethargic, congested with thick mucus and had difficulty breathing. But every time the family brought their baby to the emergency room or a pediatrician, they were told they were overreacting.

“The doctors basically told us that our baby had a common cold and we knew that she was sicker,” says her mother, Phyllis Rabinowitz. “You just know when your baby is sick.”

Just nine days after she was born, Rebecca passed away. Her parents later found out she had contracted a common enteroviral infection. If the diagnosis had been made earlier, Rebecca might still be alive.

The founders learned pediatric ER medicine is a tiny piece of the federal funding pie when compared to adult medicine. “When we spoke to the medical community, it was amazing that they just completely agreed,” says Rabinowitz. “They used the phrase ‘subpar’ to describe pediatric ER care.”

Since its inception in 2006, R Baby has raised more than $4.5 million and allotted more than 90 percent of the funds towards grants for advancing pediatric ER care.

Fundraising for babies
R Baby offers a wealth of resources on its website for parents looking to get informed about pediatric ER care, but the primary function of the organization is fundraising for infant health care.

“We raise money and give it directly to hospitals that create programs that not only benefit their hospital but will also benefit the greater nation,” says Rabinowitz.

The grantees are hospitals around the country that work to advance infant care through neonatal and ER training programs, accurate and speedy detection of newborn illnesses and virus infections, and effective communication between the family and the clinical team.

For instance, the Maria Fareri Children’s Hospital at Westchester Medical used a grant to ensure that ERs in the Hudson Valley were properly equipped and staffed to handle pediatric patients. Employing its expertise, the facility developed an Emergency Department Certification Program to certify hospitals that demonstrate their preparedness for handling pediatric ER patients.
1(current)
2

Read more stories from the May 2011 issue

To improve care, a nonprofit ensures the longevity of medical equipment