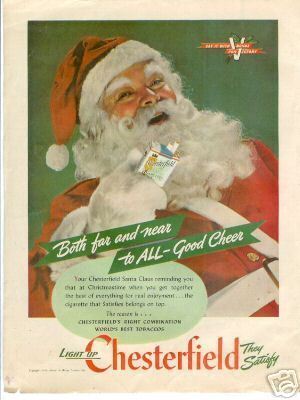 Santa and Christmas cheer?
From the April 2011 issue of HealthCare Business News magazine

President Richard Nixon didn’t think cigarettes were anything to joke about when he signed the Public Health Cigarette Smoking Act into law on April 1, 1970.

Warnings on cigarette packages had started appearing in 1965 following the 1964 report, “Smoking and Health: Report of the Advisory Committee to the Surgeon General of the United States.”

The report, released on a Saturday to minimize impact on the stock market and to maximize the coverage by the press in Sunday’s edition, offered one of the first official damning pieces of evidence against big tobacco. Findings concluded that smokers had a much higher mortality rate than non-smokers, greater incidences of heart disease, emphysema and lung cancer. It also concluded that pregnant smokers were more likely to give birth to underweight babies and that smoking was the primary cause of chronic bronchitis.

With Nixon’s endorsement, the anti-tobacco movement kicked into high gear.

What’s common knowledge today was big news at the time, when cigarette advertising included doctor endorsements, pictures of babies and even Santa Claus. Generally, the public already had an inkling of the problems smoking caused, but there was still plenty of doubt as everyone waited to hear from the country’s leaders.

The act made it illegal for cigarette advertisements to be aired on American radio or television. It also carried an amendment to the 1965 Cigarette Labeling and Advertising Act, to make the warnings on cigarette packaging in the name of the Surgeon General, providing the well-known warning, "The Surgeon General Has Determined that Cigarette Smoking Is Dangerous to Your Health."

Beginning in 1984, the warnings mentioned specific hazards associated with cigarettes. In all, the United States employs four different warnings from the Surgeon General. Still, other countries have larger, more graphic and, as studies and surveys have found, more effective warnings.

It wasn’t until 1989 that then-Surgeon General C. Everett Koop called smoking, which the 1964 report had classified as a “habit,” an addiction -— yet another black eye for tobacco.

Though on the decline, cigarettes are still lucrative, with approximately 47 million smokers in the United States (about one in four Americans smoke) and even higher percentages of smokers in many other countries. Today, smoking is banned on flights and places of business and if New York City’s mayor has his way, public parks will be added to that list.

As evidence mounts regarding the duplicity of tobacco executives and their knowledge of the hazards of smoking, concessions like the compromise allowing broadcasters to air commercials during New Year’s Day’s college football games on January 2, 1971, will be as rare as the individual who doesn’t know someone adversely affected by tobacco.