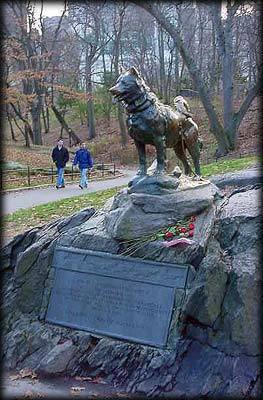 A century ago, Alaska was very unwelcoming to outsiders and travel was difficult across the hundreds of thousands of square miles of sparsely inhabited, snow-swept land. Yet, the lure of gold proved irresistible to about 100,000 individuals who rushed to America’s 49th state with dreams of sudden wealth. Today, Alaska can still be a daunting place, but modern transportation has made it more accessible.

However, less than 100 years ago, dog sleds were still the traditional mode of transportation in Alaska and the surrounding areas. But by the first quarter of the 20th century, they were being edged out by newer modes of transportation, namely ski and float planes and more recently, snowmobiles. Still, machines have yet to replace animals when it comes to Hollywood-ready stories and in 1925 sled dogs and their mushers provided one amazing script.

In that year, Nome was visited by a diphtheria epidemic that was hitting the native Inuit population particularly hard. Nome, being so remote, did not have a large investment in medical care or disease treatment. This meant the nearest diphtheria serum would be found in Anchorage. To complicate matters, the area was socked-in by a persistent blizzard and the only pilot experienced enough to attempt the flight was on a visit to the Lower 48 and would not be back in time to head-off the crisis. Instead, technology took a back seat to tradition and the dogs were once again called to serve.

The Iditarod trail had long been used as a route to deliver mail to the far-flung reaches of the Alaskan wilderness’ gold mining camps and to return with gold ore mined from those sites. This time, it would be used to carry hope to a desperate populace. The trip which was dubbed “The Great Race of Mercy” by the press, would involve 20 mushers and nearly 150 sled dogs, and a little modern technology – the newly built Alaskan railroad managed to transport the antitoxins to Nenana, which still left close to 700 miles to contend with.

The relay race utilized the best teams of dogs from each village along the route with the weather pushing even the best to the limit. The temperature hovered around 40° below zero and the blizzard conditions were brutal with 80 mph winds buffeting the teams as they raced over frozen rivers and rough tundra.

The shortest leg was less than a mile while the longest was the 91 miles covered by Leonhard Seppala over some of the most treacherous of the route. This was after Seppala drove 170 miles from Nome in four days in order to meet his relay team. Yet, a large part of the fame was given to the final musher who delivered the serum, leaving Seppala and his team as B-list celebrities.

Gunnar Kaassen and his team, lead by first-time team leader dog Balto, completed the final leg of the trip and delivered the first batch of serum that likely saved hundreds of lives. The media latched on to Balto’s story and made the dog a star with a movie made about him and more recently an animated film. Seppala took this turn relatively well, except to defend his lead dog Togo, as being just as much, or more of a hero than Balto.

In the end, all the mushers and their dog teams were heroes, with some being treated better than others for their trials. Balto and Togo both lived relatively long lives and still intrigue the public today. A statue of Balto can be found in New York’s Central Park while the dog itself, stuffed and mounted, can be viewed at the Cleveland Museum of Natural History. Togo’s stuffed and mounted body is on display closer to home at the Iditarod Trail Headquarters Museum in Wasilla, Alaska. Meanwhile, the Iditarod race was started in 1973 with this moment in medical history serving as inspiration.