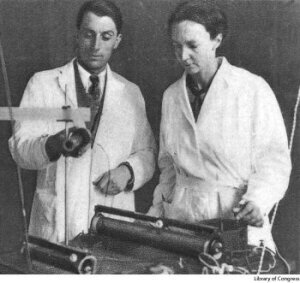 Marie Curie is well known for developing the theory of radioactivity and discovering polonium and radium, but fewer people are aware that one of her two daughters was an apple that didn’t fall too far from the tree.

After her mother’s death from leukemia, Irène Curie carried on her family’s legacy of pioneering research and staked her own place in scientific history. She won a Nobel Prize for chemistry for her discovery of artificial radioactivity in January of 1934.

Beyond both being awarded this prestigious honor, the mother and daughter had another thing in common — just like Marie who worked with her husband Pierre on discovering radium, Irène also mixed the personal with the professional when she married her lab partner.

At an early age, Irène’s parents took note of their daughter’s talent for mathematics and worked on developing her abilities through The Cooperative, a private partnership of some of France’s most distinguished academics, who taught each other’s children in the subjects of their specialty. Following the private lessons, Irène got a taste of a more traditional education at the Collège Sévigné and University of Paris, where her studies were interrupted by World War I.

During the war, Irène worked alongside her mother as a nurse radiographer in numerous field hospitals, which were equipped with X-ray machines. Unfortunately, the rudimentary systems of the time exposed both women to large doses of radiation.

After the war, Irène returned to study at the Radium Institute in Paris, which was built by her parents in the early 1900s. While working on her doctorate in 1924, she was asked to teach some laboratory techniques to a young chemical engineer named Frédéric Joliot. A recent graduate of the Paris Municipal School of Industrial Physics and Chemistry, Frédéric was hired as a junior assistant to Marie, and later became her son-in-law.

Despite the criticism of their relationship (some said a “prince consort” was trying to win over the “crown princess” of the Radium Institute to get ahead in his career), the couple married about a year after Frédéric’s arrival, sharing the last name Joliot-Curie. The bride’s mother was among the skeptics, insisting that the couple sign a prenuptial agreement and striving to make sure that Irène would be the sole heiress of their lab’s radium supply.

Working together, the Joliot-Curies made their discovery of artificial radioactivity in 1934. Just two years earlier, the couple narrowly missed their first taste of scientific esteem by failing to recognize the importance of the findings from one of their experiments and missing the discovery of the neutron-which was shortly thereafter credited to James Chadwick. In another case, a misguided conclusion about an unusual outcome of an experiment stripped the couple of claiming the discovery of the positron – C.D. Anderson was credited with the finding that same year.
1(current)
2