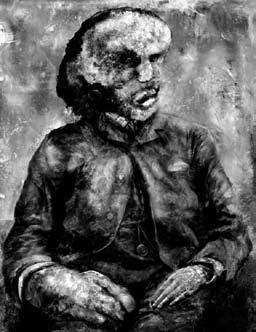 In the 1980 movie directed by David Lynch, the title character exclaims at one point, "I am not an animal! I am a human being! I . . . am . . . a man!" The movie is "The Elephant Man." The movie was closely based on the life of the "real" elephant man - Joseph Merrick.

While there's no doubt that Merrick was indeed a human being, it's still unclear what he suffered from. Merrick was born in Leicester, England on August 5, 1862. According to accounts of friends and family, his appearance at birth was ordinary. But, before long, "ordinary" would cease to be a way of describing him.

Although accounts vary, it can be concluded the first abnormalities appeared when Merrick was between the age of 21 months and 5 years old.

The deformities included extensive growth of disfiguring tumors, unchecked growth of bones and skin, and as the disease progressed, bony protrusions appeared from his skull and growths of the bones and skin of his left arm made it completed debilitated. Yet, even with these obvious handicaps, Merrick proved to be an intelligent and charming boy.

But fate was to continue to deal hardships. Merrick's mother, Mary Jane Merrick, who had given birth to two other children, one who died from scarlet fever and the other who died also showing some type of deformity, died when Merrick was just 11. Mary Jane also suffered from an unspecified deformity.

When Merrick's father remarried, the situation at home rapidly deteriorated. By the age of 15, after having run away from home a handful of times before, Merrick broke ties with his father and left for good. He was taken in by his uncle for some time, but financial hardships forced him to leave to find work at the age of 17. He entered the Leicester workhouse, where he would stay for four years.

After continual failure in securing employment and in desperate need of surgery to remove tumors that had begun to block his throat, Merrick decided to turn his liability into an asset. He joined with Tom Norman, an English showman who promoted a freak museum. Norman paid for Merrick's operation and although marketing Merrick as a "freak," overall, still treated him with compassion and fairness. Merrick managed to save 200 pounds, a significant amount of money for the time. But while touring in Belgium, the two men became separated and he was robbed of the savings.

Upon his return home, Merrick encountered Dr. Frederick Treves. The two men first met when Merrick was on display at a medical school. Treves saw that his acquaintance was starving and also ill with bronchitis, so he insisted on bringing him to the Whitechapel Hospital. The hospital would become Merrick's home.
1(current)
2