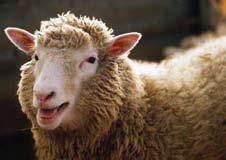 For anyone who has ever had a meal so delicious that it's been dreamed about ever since with the realization it could never be created exactly again, there's hope. Well, there's hope if you have years to wait, millions of dollars to spend and no aversion to what some people are calling unethical or even contrary to nature and in the case of this particular story, the meal would have to involve mutton. In 1952, the first animal -a tadpole - was cloned. But since then, larger and more complex animals have been cloned successfully.

It was Dolly the Sheep that made headlines 14 years ago when she became the first mammal to be cloned from an adult somatic - body-forming - cell. The lamb was named after the curvaceous singer Dolly Parton, because she was created from a mammary cell.

Dolly was born on July 5, 1996. Since her birth, there have been numerous animals cloned in the same way - through reproductive cloning - including goats, cows, mice, pigs, cats and rabbits. Although no humans have yet been cloned in a lab, identical twins, believe it or not, are natural clones because they share the same genetic material.

The guinea-pig sheep was cloned from her mother, a 6-year-old female sheep, but unlike traditional cell cloning, which uses unspecialized embryonic cells, Dolly came from a specialized adult udder cell. This successful clone proved that adult cells could be reprogrammed to generate an entire new organism. Prior to Dolly's successful birth, scientists thought that once a cell became a specialized adult cell - heart, lung or udder - there was no turning back. Dolly's birth was groundbreaking in this area of cloning.

Dolly was created in Edinburgh, Scotland at the Roslin Institute. The udder cell came from a sheep in her final stage of pregnancy. In order to produce a clone, the udder cell was fused with an oocyte - an egg cell - that was ready to be fertilized, but which came from another sheep. The oocyte had its nucleus removed, and the scientists, led by Ian Wilmut, used an electrical current to fuse the oocyte with the udder cell. The hybrid cell was electrically stimulated to induce division and was then implanted into the surrogate sheep mother.

This type of cloning is known as reproductive cloning, which creates an animal that has the same nuclear DNA as another animal. But Dolly, like other animals that have since been created using this type of cloning method, is not an exact identical of the donor animal. Only the clone's chromosomal DNA is the same as the donor. Other genetic materials come from the mitochondria from the donor egg.
1(current)
2