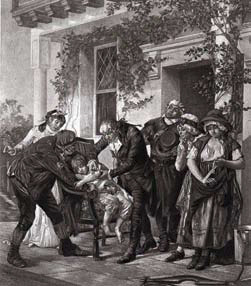 Smallpox was one of the most devastating diseases mankind has ever experienced. It first occurred around the Neolithic era (around 9500 B.C.E.). Researchers suspect it began as a crossover from a mutation of the cowpox virus. The disease eventually went on to claim an estimated 300 million to 500 million lives during the 12,000 years before it met its match.

There had been some treatments introduced over the years, but they were of questionable value. Variolization, a vaccination technique used for centuries, was one of the more effective methods of prevention. For variolization, smallpox material from a person infected with a minor case of the illness would be introduced to a healthy person, often through a scratch on the skin.

Theoretically, this lesser case would allow an individual's immune system to familiarize itself with the disease and prevent a more harmful outbreak in the future. In practice, it wasn't a perfect science, and sometimes the introduced material was too strong, causing the death of the previously healthy patient.

It wasn't until 1796 that a more dependable solution would be presented to society. Physician Edward Jenner observed that milkmaids who contracted the non-fatal cowpox disease gained immunity to smallpox. In an experiment that would never be legal today, Jenner introduced material from a cowpox pustule into small cuts made on the arm of 8-year-old James Phipps. As expected, Phipps contracted cowpox. It gets worse. Eight weeks later, Phipps was exposed to smallpox. Actually, it doesn't get worse, since he had no reaction at all and it did prove Jenner's immunity theory. Jenner then went on to developing a vaccine using cow serum containing the cowpox virus. He continued to test the efficacy of the vaccine by inoculating eight more children, including his son, and then exposing them to smallpox.

Some countries grasped the importance of his discovery faster than others. Sweden, for example, conducted a vaccination campaign and essentially defeated the disease by 1895. World powers like England and the Soviet Union followed suit by the 1940s. The United States, which reported more than 100,000 cases per year as recently as 1920, managed to end the threat a decade later. Yet Asia, South America and Africa still had millions dying.

In what must go down as one of the finest examples of humanity, the world carried out a global campaign to finish a war that had claimed more lives than all manmade wars combined. Even during the Cold War, alliances were created to bring an end to smallpox. The Soviet Union donated 140 million doses of vaccine per year, and the World Health Organization took a systematic approach to accomplish its goal. The final stronghold for the disease was found in India. With the help of a few hundred epidemiologists and 100,000 Indian health workers keeping watch for any outbreaks, what once seemed impossible inched towards a reality. Any time an outbreak occurred, anyone within a 5-kilometer radius of the afflicted was vaccinated. On Oct. 26, 1977, Ali Maow Maalin, a cook in Somalia, claimed the dubious distinction of becoming the last person to be infected in the wild of the first disease entirely destroyed through human effort. He survived.

The last person to die from the disease was actually an English medical photographer named Janet Parker. She was exposed to the virus in a laboratory setting. Although she had been vaccinated in 1966, she still contracted the full disease and died on Sept. 11, 1978.

On May 8, 1980, the Center s for Disease Control and Prevention (CDC) announced during the 33rd World Health Assembly that smallpox had been eradicated. Gone was the disease that killed or crippled hundreds of millions in its time. Like the disease itself, the CDC did leave survivors - small amounts of the virus were maintained in order to further vaccine research that could be used to combat other diseases.

Since the declaration of its destruction, no further smallpox vaccination programs have been initiated for the general public, but those working with the virus and some in the military are still inoculated.