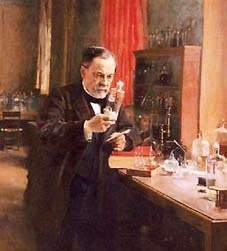 Before Louis Pasteur attached his name to milk cartons across the world, he was a chemist with an impeccable ability to conduct research. But his history follows an ever-upward directory with one brilliant discovery leading to the next and many of those discoveries offering a substantial positive impact for mankind.

Pasteur's first discovery dealt with fermentation and putrefaction processes that vintners and brewers could encounter during the course of their work. Previously, the causes behind both processes were attributed to chemical reactions. But Pasteur determined that fermentation and putrefaction had their origins in microorganisms. His discoveries led him to develop pure strains of yeast for use by brewers.

Shortly after that work was complete, Pasteur's eldest daughter died from typhoid fever, the first of three daughters to succumb to the disease. It's likely that these tragedies are what spurred him to delve into the realm of medicine. But his contributions to the health of humans would still be a while in coming. First, he spent time discovering and then preventing a disease that had been wiping out silkworms and cutting France's silk production drastically. Again, microbes were to blame.

Amazingly, he wasn't even close to concluding with his contributions. On April 20, 1862 Pasteur and his colleague Claude Bernard conducted an experiment based on a theory Pasteur developed where the belief was that foods (most commonly liquids) heated to the proper temperature and for the correct amount of time could destroy harmful bacteria without overly compromising the benefits of the food. The experiment led to what is now called pasteurization.

After his discovery, further hardships hit Pasteur when at the age of 46, he had a stroke leaving him unable to walk or speak for months. Even after he recovered to some extent, he would walk with a limp for the rest of his life. Yet, this didn't deter him from pursuing the cause of infectious diseases.

His next contribution was proving the cause of anthrax. Again, a microorganism was the culprit. Pasteur used these findings to create a vaccine for anthrax in May 1881. His success with immunizing against anthrax served as inspiration for further studies, which in turn led to discovering a cure for rabies.

Pasteur and his colleague Emil Roux were working together to create a cure or immunization for rabies. They had been experimenting for years with animals trying to unlock the secret of this horrible and deadly affliction. They had experienced success, because that the disease was such a grim way to die, they were understandably reluctant to test their vaccine on humans.

It wasn't until a nine-year-old boy was brought in that they made the leap. The boy had been mauled by two rabid dogs and had no hope of surviving unless the vaccine was successfully administered. A series of shots were given over a ten day period. The boy never contracted rabies. A patient just a few months later was also successfully treated. While the vaccine requires relatively quick treatment, it has given people bitten by rabid animals a chance to recover.

Unfortunately, the ravages of time and the toll it takes on the body are not something there's a vaccine for and Pasteur, for all his brilliance, was subject to them as readily as those who live their lives unheralded. He had two more strokes and passed into history on September 27, 1895 with his wife by his side.