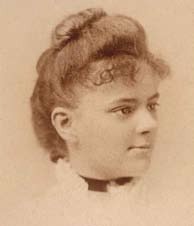 Although Susan B. Anthony is well-known regarding women's rights (possibly due in part to being immortalized through a U.S. dollar coin bearing her likeness) she was far from the first to advance the rights of women. In fact, it's arguable that the coin should have borne the likeness of Elizabeth Blackwell.

Blackwell was born in England on February 3rd, 1821 and educated by a private tutor. By the age of 11 her father moved the family from England to America. Her father was highly involved in social reform. This helped influence Elizabeth.

After a number of failed business ventures her father died, leaving the family without income. Elizabeth, her two older sisters and her mother opened a private school to make ends meet. It was during this time that Elizabeth gained her lifelong interest in medicine.

When she moved away, she held a position as a teacher. She continued her own studies of medicine in private. In 1847, she sought out a school that would admit her to study medicine. She was roundly rejected by almost all the schools she applied to until she applied to Geneva Medical College in Geneva, New York. There, the administration queried the student body about whether or not she should be admitted. The students, believing it to be a joke, voted to accept her.

Upon discovering her request was in fact serious, the students were shocked and initially responded by shunning Blackwell. Eventually however, many came to respect her and accept her as a talented peer.

Blackwell graduated first in her class in January, 1849, to become the first woman to graduate from medical school and the first recognized female doctor.
Soon after graduating, she became a naturalized U.S. citizen and then travelled to Europe for further studies. In Paris, she contracted an eye infection which left her blind in one eye, preventing her from pursuing a career as a surgeon.
In 1851, she returned to New York where she was forced to purchase a house to begin her practice after being refused a position at hospitals and even office space by landlords when she attempted to rent a location for her business.
While not serving women and children at her practice, she penned lectures. These lectures, The Laws of Life; with Special Reference to the Physical Education of Girls, were published in 1852.

The year after, Blackwell opened a dispensary in a poorer area of New York City. Her sister Emily and Marie Zakrzewska soon joined her - both having obtained their medical degrees following Elizabeth's lead.
1(current)
2