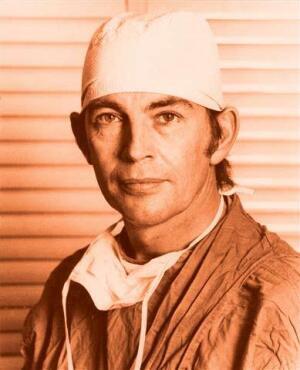 Poets have tapped into its symbolism for hundreds of years, it has lent its services to a number of words including breaking, rending, ache, felt, warming and more. It also follows a few like the prefix "dis." There's even a naked little cherub that is associated with it and candies shaped like it. It was understood that if it was literally rent or broken, you were without question in serious trouble. While it's still generally true even to this day, on December 3, 1967, a gray area was created in regards to what happens to an individual with a failing heart.

On that day, retired grocer Louis Washkansky, 24-year-old Denise Darvall and surgeon Dr. Christiaan Barnard of Groote Schuur Hospital in Cape Town, South Africa all played major roles in a procedure that would literally become near and dear to many hearts in the years to follow. Washkansky, who was in his mid-fifties, arrived at Groote Schuur towards the final stages of heart failure with doctors predicting he had just weeks to live. Barnard approached him to see if he would be interested in an incredibly risky surgery that could possibly extend his life . . . but might kill him even earlier. Washkansky quickly accepted and he also gained his wife's blessing to have the procedure done.

With Washkansky's vital organs weakening day-by-day, the window of opportunity to attempt the world's first human heart transplant was quickly closing. Considering the serious nature of the surgery, it was crucial to operate on Washkansky while his body was still strong enough to recover. A donor was needed immediately if there was to be any hope of a successful recovery. That part of the equation was supplied by a fatal traffic accident.

Denise Darvall and her mother were both killed in a traffic accident. Denise's father gave his consent to give her healthy heart to someone in need. Darvall was pronounced dead early on December 3rd. At 2:32 A.M., her heart stopped beating. Dr. Barnard waited for five minutes and then began the transplant operation. Less than 30 minutes later at 3:01 A.M., her heart had been removed and placed in a metal bowl. He quickly began the next part of the procedure - removing a damaged, but still functioning heart from a living person.

Nearly three and a half hours after it produced its last beat in Denise Darvall, a single electrical shock was passed through the heart. It began to function once more, and with some adjustments it fell into a steady rhythm.

The world took notice and the media rushed to interview Dr. Barnard. He became somewhat of a celebrity, appearing on Face the Nation here in the states, being taken out for a tour of the city with Walter Cronkite and later meeting with President Johnson.

For Washkansky, the future wasn't as bright. He passed away just 18 days later. However, his cause of death wasn't heart failure as many would have imagined. Instead, he died from pneumonia which overpowered his already-weakened lungs.

Following the initial success, other surgeons stepped forward to perform the surgeries across the world. Most of these surgeries resulted in the patients dying in just a few hours or up to a few weeks later. It wasn't until Barnard returned from his media tour and performed his second transplant that there was any major success: that recipient lived for 19 months.

Barnard himself continued to revolutionize medicine until his death in 2001.