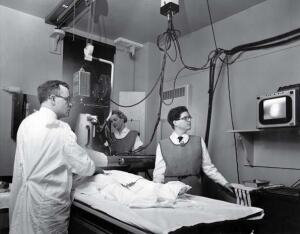 In the United States, the leading cause of death for men and women is heart disease. This includes any conditions affecting the heart such as coronary heart disease, heart attack, congestive heart failure and congenital heart disease. In the mid-1950s, little was known about how to prevent heart disease. So it comes as no surprise that the first coronary angiogram occurred as somewhat of an accident.

A coronary angiogram is an X-ray used to find out if a patient's coronary artery is clogged. Today, during a coronary angiogram, a doctor numbs a spot near a patient's groin region or arm and inserts a catheter into an artery which is then threaded up to the heart. Contrast agents are pumped through the catheter so the arteries will show up on the X-ray. By studying the X-ray images, a doctor can determine if there are any problems concerning a patient's coronary artery. Although today, this procedure is fairly straightforward and common its discovery was a bit frightening.

On October 30th, 1958, Dr. F. Mason Sones was performing a routine procedure in which contrast dye was to be injected into the aortic valve of a twenty-six-year-old patient with valvular disease. Right before the dye was to be injected, Sones noticed that the catheter tip had inadvertently entered the patient's right coronary artery. Sones requested that the catheter be removed but before it was finally taken out, a large amount of dye had been injected directly into the artery.

From this incident, Sones was expecting the worst -- for the patient's heart to go into fibrillation, in which case, he would have to perform an emergency open chest massage to get the patient's heart back on its correct rhythm. Much to his surprise, instead of fibrillating, the patient's heart stopped and Sones, thinking fast on his feet, yelled at the patient to cough and keep coughing. His encouragement worked and the coughing successfully restarted the heart's beating.

From this experience, Sones realized that coronary arteries could tolerate a certain amount of contrast dye. This discovery would soon allow cardiologists to acquire accurate pictures of arterial blockages for the first time. He recalled, "I knew that night that we finally had a tool that would define the anatomic nature of coronary artery disease."

After the event, Sones studied dye chemistry, video engineering and optical image amplification in order to perfect the procedure. He completed his studies at the Cleveland Clinic Foundation where he had been appointed head of pediatric cardiology. He went on to master his accidentally discovered technique through the use of specially designed catheters.
1(current)
2