by Sean Ruck, Contributing Editor
Cardiac MR is another emerging technology that could shake up the cardiac imaging world, but like cardiac CT (also covered in this issue), it currently represents a tiny share of the market. To get an idea of where things are, how and why the growth of the field could benefit patients, and what’s holding things back, HealthCare Business News spoke with Dr. Dee Dee Wang, director of structural heart imaging at Henry Ford Hospital.

According to Wang, some of the problems preventing cardiac MR adoption aren’t unique to the technology. It’s nearly a given that reimbursement is an issue, but she says perception is also a problem for new technologies. “When any new imaging software or hardware is brought into general practice, the value of that new technology becomes underrated as the focus is put on the technology itself rather than the skills and expertise needed to best use it. In this case, the new technological advances with cardiac MR [equate to] the value of how we understand our ability to utilize it in our testing for valvular structural heart disease and for cardiac viability too.”

She says that every time a biomedical engineer, software designer and a computer coder can come together to find a new clinical use for a technology they’re building, in a sequence clinicians can utilize, a new patient population gains another tool to help with their diagnosis and treatment. “The main limiting factor is not the applicability, it’s the inability to get reimbursement to account for the clinical and physician know-how to make it all possible,” Wang says.

According to Wang, value of cardiac MR goes beyond the scan and sequence. Part of its strength is in the imaging processing capabilities. She points to 3D imaging as an example where ultrasound and MR are often preferred for use in the pediatric population because there’s no radiation being used.

Cardiac MR’s ability to provide imaging data to create a 3D heart gives the surgical team another tool to help plan the event. They’re able to discuss and debate best course of action in a hands-on way prior to procedure.

The growth of 3D printing will likely help expand cardiac MR’s market, but it, too, is a relatively new technology with a very small footprint. According to Wang, six years ago only about 25 hospitals in the United States had in-house 3D printing capabilities. Today, that figure is around 200. For hospitals who don’t have in-house printing abilities, some contract with 3D printing companies. “It all depends on their clinical volume and how much of a disease state they see that has that utility for it,” says Wang.

Regarding utility, Wang says hospitals should reconsider asking which imaging modality is superior to another modality and instead ask which will best benefit treating a patient’s disease the most. “Which will add more information to help us understand how to treat the patient?” she asks.


Some of that information needs to be shared more and new protocols and implementations continue to be developed as more data are gathered. To that end, Wang says there needs to be an increase in educational guidelines to recommend how to apply the new protocols. She also says the definition of a “center of excellence” also needs to be agreed upon and adopted. Guidelines need to be determined to detail what should be done for a basic cardiac MR, what the basic sequences should be, and traditional healthcare silos still need to be knocked down at many hospitals across the country. “If we have medicine move forward where there are no silos, we would not have a shortage in education. There would be more opportunities to have everyone be at the same level of understanding, for new technology adaptation faster,” Wang says.

One of the more problematic traits of those silos is that they result in manufacturers and software developers telling the medical community what it needs rather than working with that community to hear what is on the wish list or exclude key stakeholders from the conversation. “What cardiac MR needs is not the next big thing; it needs collaboration between biomedical engineering societies and the physicists and physicians to come together to determine how to make it more of a consummate technology to help the patients real-time,” says Wang. 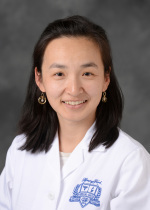 Dr. Dee Dee Wang
“I think there’s an opportunity for collaboration in the future,” says Wang. “The focus right now is education and getting people to understand what’s currently available, and getting everyone on the same page. The frustration from a clinical standpoint is that, as physicians, we know what’s needed. We know what we wish the cardiac MR could do. We hope the industry will listen to us and build with the physicians instead of trying to sell us a machine that doesn’t meet everything we’d like it to be.”

1. Session 690 New Frontiers in Multimodality Imaging of Aortic Stenosis
2. Nonischemic cardiomyopathy: When and How to Use Cardiac MRI to guide Diagnosis and Management
Top Indications for Cardiovascular Magnetic Resonance in Modern Cardiology- A case-based session: Joint Symposium of the Society for Cardiovascular Magnetic Resonance and the American College of Cardiology