Computed Tomography (CT) has transformed medical care worldwide since its development in the 1970s, and the technology has advanced considerably since then, allowing for an ever increasing number of applications. CT utilizes a rotating X-ray tube detector array in order to generate cross-sectional images of the body, typically utilizing an X-ray beam covering a broad energy range, but with a peak energy of 120 kilo-electron volts (120 kVp), although this may be higher or lower in certain clinical situations. The image created assigns grayscale values based on the attenuation of the beam (i.e., how much was absorbed or scattered in the patient). While traditional CT is performed using a single peak energy level, spectral (or “dual energy”) CT refers to methods that obtain information regarding tissue attenuation at 2 or more energy levels. Broadly speaking, this may be achieved by either varying the energy level of the beam generated by the X-ray tube, or by discriminating between the energies of the incident X- photons at the detector. This allows for multiple new types of images to be generated and multiple new applications.

Material density images
Iodine has been employed for many decades as a means to generate contrast in X-ray-based imaging modalities, including CT. One of the primary advantages of spectral CT is that it allows separation of the total attenuation of the tissue into that which is attributable to iodine, and that which is attributable to water (the primary constituent of biological tissues) through a process called material decomposition. This allows quantification of iodine content, and generation of iodine overlays or iodine basis images.

Iodine quantification is an active area of research as a quantitative imaging biomarker, and is being studied as an indicator of treatment response in various cancers, for example. Additionally, there is a growing body of evidence that iodine images can help discriminate between benign and potentially malignant incidental renal masses on routine abdominal contrast enhanced CT’s — a common occurrence. Typically, these incidental findings would require bringing the patient back for a follow up multiphase scan with and without contrast. With iodine images it is now possible to characterize the majority of these lesions at the initial scan, saving time, cost, and radiation dose to the patient.

Another area where material decomposition is poised to bring value to CT is in bone marrow edema imaging. In this case, calcium is used as one of the basis materials, and by removing its contribution to the image, it becomes possible to visualize bone marrow edema, which could previously only be done with MRI. Although research is ongoing and this is still in its infancy, many centers are beginning to employ it in the clinical routine. These are typically performed in the trauma setting, such as when evaluating spinal compression fractures. Currently, determining the acuity of spinal compression fractures at CT can be unreliable, and many patients go on to have an MR, resulting in additional cost and possibly length of stay. With spectral CT, it may be possible to answer this question up front, reducing both cost and length of stay.

Virtual unenhanced (aka “virtual non-contrast”) imaging
Many scan protocols call for an initial non-contrast scan followed by a contrast-enhanced scan. This allows the radiologist to differentiate between tissues that were intrinsically bright on the image prior to contrast administration from those which became bright only after contrast administration. However, this comes at extra expense, time, and radiation dose to the patient. With spectral CT, once the iodine and water contributions have been decomposed, virtual unenhanced images can be generated which mimic a non-contrast scan. In some applications this virtual unenhanced image may be able to replace an actual non-contrast scan in multiphase pre- and post-contrast protocols, saving time, radiation dose and cost.

Virtual monoenergetic imaging
X-ray beams consist of individual photons of varying energy, although with a user selected peak energy level (i.e. 120 kVp). This is referred to as a polyenergetic or polychromatic beam. The image generated is therefore a composite of all of the different energy X-ray photons contained in the beam. Spectral CT allows the generation of virtual monoenergetic images, as if the beam consisted entirely of a single X-ray energy. This can benefit in several ways.

Lower energy images can be generated that enhance the appearance of iodinated contrast. These have been shown in multiple studies to improve lesion conspicuity in the liver, both for hypervascular and hypovascular masses. Additionally, they can be used in angiography to enhance vascular contrast. This can be leveraged to reduce contrast dose, which can both reduce cost as well as improve patient safety (lower risk of contrast induced nephropathy), and can also reduce the need for repeat scans due to a suboptimal contrast bolus. CT pulmonary angiography occasionally suffers from transient contrast interruption which can result in a non-diagnostic scan, for example. In these cases patients are often re-dosed with contrast and rescanned, resulting in both double the contrast load as well as double the radiation dose. With virtual monoenergetic imaging, lower energy images can be reconstructed that enhance what contrast there is and can salvage an otherwise non-diagnostic scan, reducing cost as well as contrast and radiation dose to the patient.

On the other hand, higher energy images can be generated which reduce metal artifact, such as in the presence of orthopedic hardware. This is of significant benefit in the evaluation of joint prostheses, where traditional CT scans suffer from severe artifacts. The difference is so dramatic, in fact, that in our own institution, many orthopedists now specifically request scans to be done with dual energy. We also use higher energy virtual monoenergetic images in addition to metal artifact reduction to improve CT myelography in the presence of spinal hardware, and have not looked back.

Niche applications
In addition to the broader applications described above, there are several niche applications to be aware of. For one, spectral CT allows characterization of kidney stone composition, which can affect how they may respond to various treatments. This can be valuable information to the urologist, and allow for more expeditious triage to the correct treatment. Additionally, through similar techniques, spectral CT can be used to detect gout tophi. In fact, spectral CT is already included as a criterion for establishing a diagnosis of gout, and can also be used to monitor patients who are on therapy.

Training and workflow considerations
As with any new technology, its value will not be realized without adequate staff training. Luckily, there is little difference from the technologist’s perspective between scanning a single energy or dual energy scan on the latest systems. In fact, most systems also allow generation of at least some basic spectral reconstructions at the scanner console itself, in automated or semi-automated fashion, which can then be pushed to PACS for review. This avoids the need for the technologist and/or the radiologist to have to use a separate workstation or thin client, saving valuable time and minimizing interruption of the standard routine. The more important task is deciding when and where to leverage the capabilities of spectral CT without overwhelming the radiologist with a sea of images. This requires careful attention to protocol design, as well as radiologist education regarding the new types of images and their use. To this end, there are many workshops and conferences available for this purpose. While it may not be possible for every radiologist to attend, at least a handful of radiologist “champions” should be designated who can take the lead. One of the major concerns from radiologists is the increasing number of images to review. What we have found helpful to encourage adoption in this regard is to begin by introducing virtual monoenergetic images, since these have the “look and feel” of traditional CT images, but with the advantages discussed above. In many cases these can replace the routine image set, resulting in a net-neutral image count. 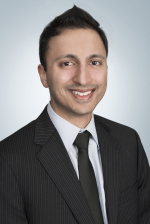 Nakul Gupta
In summary, there are many ways in which spectral CT can benefit clinical practice and enhance value, whether by unlocking novel CT applications, reducing contrast dose, or reducing radiation dose by eliminating certain non-contrast exams or repeat scans. While the plethora of available images may seem overwhelming at first, taking a stepwise approach to implementation and designating a handful of radiologist champions can help make for a smooth transition.

About the author: Dr. Gupta is an Assistant Professor of Radiology and Director of Body MRI at Houston Methodist Hospital with fellowship training in body cross sectional imaging. His academic interests include dual energy/spectral CT, as well as advanced body MRI applications.