When breast imaging comes to mind, mammography is the undisputed current modality of choice. Used as the primary screening tool for breast cancer, other breast imaging (BI) modalities, such as MR and ultrasound, form a comparatively smaller part of the market. For this reason, it is mammography that has typically driven the majority of BI’s market growth.

In our latest report, Signify Research has predicted that growth in the mammography market will begin to slow in the coming years. There are three key reasons why we see this occurring:


Each of these points are explored below:

1. U.S. DBT installed base has started to saturate
Over the last two years, the adoption of Digital Breast Tomosynthesis (DBT) technologies has seen the mammography market experience rapid growth. This trend has been particularly pronounced in the U.S., which peaked in 2017 after reimbursement had been introduced a few years earlier. There, providers spend upward of $300,000 on 3D solutions, compared to around $200,000 for their 2D counterparts. 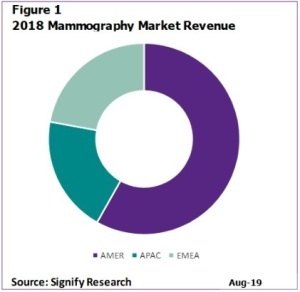 The U.S. market is unique in that it formed over 55 percent of the global market in 2018, as Figure 1 shows. Providers in the U.S. are willing to invest in higher-cost solutions, resulting in higher average selling prices (ASP) that differ significantly from their European and Asian counterparts. It’s for this reason that growth in the U.S. market has a significant impact on worldwide growth.

And as the saying goes, "what goes up must eventually come down." Despite recording an increase in the installed base of systems for 2018, vendors have reported that growth in the U.S. market has begun to slow. As of June 2019, 61 percent of certified facilities possessed at least one DBT unit, and the market has now moved into late-stage adoption. Whilst the adoption of DBT is predicted to continue, albeit at a slower rate, the proportion of software upgrades as opposed to new system installs is expected to increase. Averaging at around $40,000-50,000 per software install, this gain in revenue will be significantly less compared to selling a whole new system.

In addition to this, total growth in the U.S. mammography installed base is also beginning to slow. As Figure 2 shows, since 2015 and the initial drive in adoption of DBT, the number of new units installed in the U.S. has been growing. However, the annual rate of growth has slowed, from 11.7 percent in 2015 to 8.5 percent in 2018, with the decline in growth rate forecast to continue over the period to 2023.

Thus the U.S. market, which forms the majority of the breast imaging market today, is predicted to slow over the next five years. 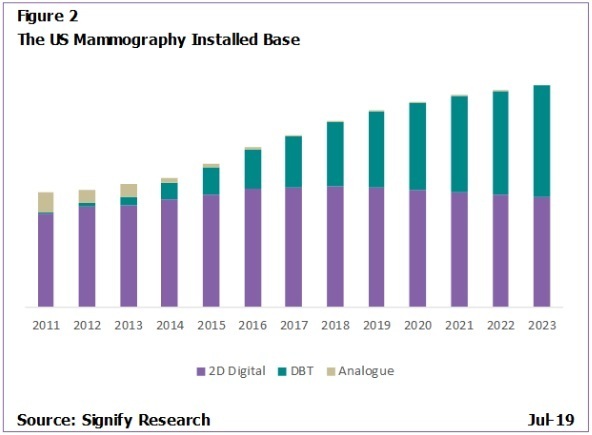 This slow down in growth will significantly affect the global market, as the U.S. has been the real engine for growth over recent years. Other large regions, like Western Europe, have seen limited growth now for several years, and although high growth has been projected in regions such as the EEMEA and Asia, the comparative gains in revenue are not predicted to be enough to maintain historical global growth rates.

2. Pricing pressure is set to increase
The decline in global growth is also set to be exacerbated by a decline in ASPs. DBT vendors have enjoyed a period of relative isolation for several years, with few competitors. This has resulted in little price pressure and ASPs remaining relatively high.

As an example, in the U.S. there have been largely only three vendors selling DBT solutions for several years (namely Hologic, GE Healthcare, and Siemens Healthineers). However, during 2017 and 2018 a number of vendors gained approval for systems to be sold in the U.S. and began to enter the market. Vendors such as Adani Medical Systems and Planmed Oy entered with 2D systems, and can be expected to follow soon with 3D permissions; and Fujifilm Medical gained approval for its 3D Aspire Cristallae system in 2017. These market entrants sell comparatively lower-cost solutions compared to the incumbents, with Fujifilm Medical in particular marketing itself as a low-cost competitor to the market leader, Hologic.

This rise in competitive pressure is set to contribute in part to the overall reduction of ASPs. To intensify this, 2018 saw Hologic respond by beginning sales of its "3D Performance" system, a lower cost DBT alternative to its 3Dimensions and Selenia Dimensions systems. The further diversification of 3D portfolios by competing vendors is expected to follow this.

Accordingly, whilst ASPs have historically been maintained, this influx of lower-cost solutions is forecast to impact the market significantly over the coming years.

3. Interest and growth is expected to be driven elsewhere
Breast imaging is beginning its transition into a multi-modality practice, incorporating ultrasound and MR technologies with increased frequency.

Several large-scale studies are currently taking place evaluating the impact of the implementation of risk-based programmes. These, which include the MyPeBs and WISDOM trials, are large scale in size, and differ from the current age-based screening model.

Implementation of these programmes is likely to see mammography play a principal, but less pronounced, role in screening as supplemental modalities begin to rise in popularity. This trend can be seen in its infancy in the US where the continued impact of breast density campaigns is expected to lead to a corresponding rise in supplemental ultrasound screening.

Mammography’s pitfalls have been well-publicised for some time, especially in dense breasts, and whilst DBT shows some promise in offering increased sensitivity compared to its 2D counterparts, research relating to this is much less widespread than that relating to the use of ultrasound.

Vendors are therefore considered more likely to begin to invest in supplemental modality systems once these programmes begin implementation, to the detriment of the mammography market.

Provider interest is therefore expected to be driven elsewhere, and the slowdown in mammography market growth is expected to herald the adoption of newer technologies in BI.

As DBT has become more widely distributed, the case for machine learning has strengthened. Countries such as Sweden have now begun trials examining the large-scale implementation of programs where machine learning is being used in conjunction with DBT, and as the forecast continues, growth in this segment is expected to be strong, particularly in the North American and Western European markets.

ABUS systems, previously side-lined by DBT technologies, are also now projected to gain more prominence as awareness of ultrasound imaging in dense breasts rises. Markets such as China and Japan, which also form significant parts of the mammography market, are forecast soon to increase their uptake of ABUS imaging systems. And whilst mammography will remain a mainstay in these countries, the potential use of a modality tailored for typically dense-breasted populations offers an attractive alternative for providers.

Vendors react to decline in growth rates
To counter this expected decline, leading vendors are now beginning to seek revenue in other segments.

Hologic, which is currently the market leader, has recently made extensive efforts toward expanding its portfolio, first announcing the establishment of an agreement with Philips aimed at opening up multi-modality deals. Since, it has acquired a number of companies and engaged in several development and distribution agreements, including with Clarius, SuperSonic Imagine, Micrima, and MagView Systems. Hologic is now planning to expand its portfolio across the entire ecosystem of breast imaging in order to increase its revenue streams.

GE Healthcare and Siemens Healthineers have continued to push the sales of their respective ABUS systems, and although this product has not performed as well as expected previously, the saturation of DBT technologies is expected free up budgets for other considerations in the coming years.

These vendors are also now beginning to look toward using service revenue to drive growth. Many companies have begun to push this in an effort to achieve some consistency in the notoriously volatile space in anticipation of the coming deceleration.

Overall these movements position each company well to achieve continued growth, as mammography systems sales begin decelerating. The slow down in growth in the mammography market is not a reflection of mammography falling out of favour, more a signal that the market for its biggest revenue generator, DBT, is beginning to mature. As interest increases in other emerging technologies, growth is instead predicted to begin to be seen elsewhere.

Imogen Fitt
About the report: The above insight is taken from Signify Research’s market report “Breast Imaging — World — 2019”, which is due to be published in August 2019. It provides a complete overview of the breast imaging market, covering both hardware and software, to highlight the interplay of the three technologies: MRI, mammography and ultrasound, broken out at a country level.

About the author: Imogen Fitt is a market analyst for Signify Research.