If not addressed, problems with coldheads
can cause serious damage that may
require the costly replacement of
helium for repairs.

How to get the most life out of your MR coldhead

by John R. Fischer, Senior Reporter
Designed to prevent the burn-off of the liquid helium inside the scanner, a coldhead is a vital piece of the MR puzzle. Issues with the coldhead can directly affect temperature and magnet pressure, potentially putting a scanner out of commission if not addressed immediately.

Severe issues, such as a quenched magnet, require replacing the liquid helium in a costly and time-consuming multiple-step process.

While there’s no panacea for all coldhead-related issues, experts agree that the best approach for fixing a coldhead is through early detection and troubleshooting issues as they arise.

Living life to the fullest
Like any part, coldheads and their components have a limited lifespan and wear with age. But improper maintenance can erode them before their time, leading to earlier replacements and greater expense to overall lifetime use.

“Proper and timely preventive maintenance of the cryo-refrigeration system, including the chiller, is key,” she told HCB News. “Replacing the adsorber in the compressor once a year, for instance, reduces the risk of contamination from the compressor to the coldhead. There should also be constant monitoring of environmental conditions of the magnet room as well as helium levels and vessel pressures.”

Consistent breakdowns of chillers, helium lines and compressors, as well as power failures, enable oil to slide through protection systems within the compressor and enter into the coldhead, contaminating and causing it to fail early. Another issue is ensuring a positive flow of helium within the coldhead unisock during coldhead replacement, as air and moisture can cryopump into the unisock, leading to losses in liquid helium and performance.

When oil is present in the old coldhead, simply replacing it does not fix the issue with the compressor, flex line and other parts, such as a bad oil separator within the compressor. These components also must be replaced, so as not to recontaminate the new coldhead.

“Most people just come in and put a coldhead in. It’s probably going to work initially, but if they don’t know there’s oil in the system, that’s going to shorten the coldhead’s life,” Sean Mykleby, president of ThermoMagnetics and Cryogens, Inc., a division of Southwest Medical Resources, Inc., said. “Maybe six months or a year down the road, depending on the severity, the coldhead starts to fail again, leading you back on-site to send out for another replacement coldhead.”

New coldheads and parts must undergo long hours of testing to ensure they can perform efficiently as replacements. For this and other reasons, Mykleby recommends replacing entire coldhead systems and associated parts rather than just switching out individual components, a practice more frequently found in Europe. Doing so reduces the risk of misdiagnosis and avoids repeat visits for multiple failures due to the out-of-sync life spans of different parts.

“You may get it working temporarily, but you’re not going to get any longevity out of it because all of the other parts haven’t been replaced,” said Mykleby. “If you have to go back in a month or two months or a week, now the money you potentially are trying to save has gone out the window from the costs of having to go back on-site, the waiver, and the expenses.”

Coldhead repair and replacement technology becomes even more complex when taking into account the different types that exist, the types of associated parts, and the repair procedures involved with each. 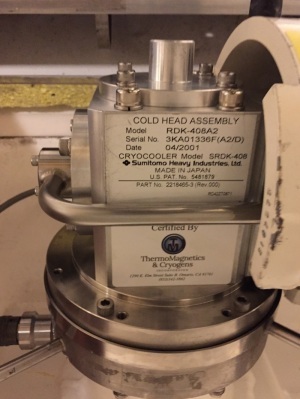 Coldheads and components such as compressors and helium
lines should be inspected at least twice a year for
maintenance and if need be, replacement.
Knowing your system
Different magnets have different coldheads and with them, different procedures for maintenance, repair and replacement. Serrano said that with such variations comes a need for specific sets of hands and expertise.

“Use only field service engineers that have been trained in the replacement of coldheads for the specific magnet being worked on,” she said. “Some require the use of a heater box, some require the magnet to be ramped down prior to replacement, and some are rebuilt on site.”

In addition, a thorough understanding of the different types of associated parts used in conjunction with coldhead technology is also necessary for proper maintenance. Water-cooled compressors, for instance, are more common than air-cooled ones due to their lower prices, but require greater maintenance and expenses for maintaining clean, full supplies of water and clean filters. They also are one of the biggest, if not the biggest, reasons for coldhead compressor shutdowns.

Air-cooled ones, on the other hand, require large capacities for heat removal, necessitating the need to upgrade air conditioning systems within the computer room to handle the amount of heat dumped there by the cool air compressor. More expensive “split” air-cooled compressors like Sumitomo’s FA-70, which consists of controls, customer interface and the adsorber on the indoor unit, and a compressor capsule, heat exchanger and fan on the outdoor unit, also may be present in some systems.

For efficient repairs of these and other parts associated with coldhead technology, Bob Deobil, president of Sumitomo (SHI) Cyrogenics of America, Inc., a division of Sumitomo Heavy Industries, Ltd., said original OEM parts are a must. “It is essential that original OEM parts are used during any service or maintenance, as many replacement parts do not adhere to the same stringent design standards, material specifications and performance of the original parts.”

“We’re able to detect coldhead failures weeks before they happen in some cases,” said Mykleby.

While useful, it is important that providers understand what specific changes and alerts signify so that they can address all issues swiftly and efficiently.

Typical heaters in magnets run, on average, at 30 percent efficiency, with drops in heater-duty cycle signifying that an issue has occurred with the coldhead.

If not addressed right away, these issues can evolve into serious matters, including a quenched magnet, requiring experts to undergo the processes of inspecting and replacing the coldhead and potentially the magnet itself, as well as replace the liquid helium to restore appropriate coldhead temperature and magnet pressure.

The need for thousands of liters of liquid helium adds up in expenses and is even more challenging during periods when its availability is low. Such an ordeal is what motivated Sumitomo to begin developing a new low pressure cooler to reduce the amount of liquid helium needed to restore magnets to their proper temperature.

“We’ve created a system whereby the coolers have some proprietary heat exchangers mounted on them,” said Deobil. “Then we use a helium gas circulating fan to send the gas out to the magnet. The cool helium gas goes out to the magnet and then the warmer gas returns back to our system. You leave it running for a period of time, and magnet temperature gradually drops.”

The mobile solution, which can be wheeled in on a cart, is equipped with a turbopump, ruffing pump, and controls for pumping down and cleaning up the magnet to ensure no impurities exist. It also has thermal control features to oversee the cool-down and warm-up of magnets over as many successive periods as necessary.

The downside is that temperature and pressure adjustments span a few days compared to the current repair method, which takes hours. This, however, can be an advantage, according to Deobil. 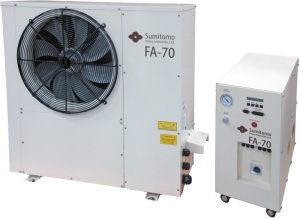 Understanding and maintaining parts and components such
as Sumitomo's FA-70 'split' air-cooled compressor are crucial
to making sure coldheads are functioning properly.
“If a magnet has had a problem, manufacturers may want to control the timing of that cool-down, and they may also want to go through successive cool-downs and warm-ups,” he said. “This gives them the potential to recover a magnet that’s had a problem in the field.”

While potentially useful, experts agree that the best approach for maintaining, repairing or replacing a coldhead to its maximum potential and lifespan is to adhere to OEM specifications for chiller, compressor, and power requirements.

“When we do coldhead changes on a Siemens 4K magnet, the Siemens procedure says you have to ramp the magnet down to change the coldhead,” said Mykleby. “Obviously, that adds a significant expense to the change of the coldhead, and there are a lot of people out there changing the coldhead without ramping down the magnet. This, however, opens up the potential for getting ice into the magnet as well as quenching of the magnet. I would say the best thing is to just follow OEM procedures.”