Could AI and 3D printing be the future of OB/GYN ultrasound?

by Lauren Dubinsky, Senior Reporter
Artificial intelligence is taking the healthcare industry by storm. Algorithms can now automatically detect suspicious lesions and identify and prioritize the most urgent cases.

“There has been a lot of focus on how to speed up those exams and make sure we get the right information every time, given the pressure on patient throughput and the increasing volumes,” Jeff Cohen, leader of the OB/GYN business unit at Philips, told HealthCare Business News.

Last year, the company launched a tool called fetal biometry that is powered by AI. It automatically recognizes that the user is looking at a fetal head or bone and takes the measurements.

According to Cohen, this saves a significant amount of time because most pregnancies are normal. The clinician just has to confirm fetal development and this new tool allows them to do that more quickly.

Canon Medical Systems USA Inc. offers a similar tool on its Aplio i800 ultrasound system, and other major ultrasound vendors, including GE Healthcare, are interested in the technology, but don’t yet have an offering.

“When it comes to interpretation, if you look at some of these clinical challenges they can be quite rare — happening in one in 1,000 patients,” said Roland Rott, general manager of women’s health ultrasound at GE. “It can be demanding for the broad field of ultrasound technicians and doctors to always identify that with 100 percent confidence.”

Not everyone believes AI is ready to fulfill all of its potential. Dr. Kathleen Bradley, a maternal-fetal medicine specialist who runs her own practice in Los Angeles called Maternal Fetal Medicine Consultations, believes that AI technology is promising, but that a lot of work needs to be done to understand and implement it in a practice.

“I don’t want to lose the personal touch [with the patient], which I think is so very important especially in my field of medicine,” she said. “I’m not a radiologist so I don’t read images behind a computer. I do everything in real time. I’m interested in seeing how AI will couple with the personalization of medicine.”

3D/4D and 5D
“Ten years ago, it was quite normal to have simple 2D images, which were slices of the body,” said Rott. “Today, 3D and 4D ultrasound is the norm.”

He added that with this technology, clinicians can acquire the full volume of information instead of a single slice. That can help them come to certain conclusions faster.

Bradley, a longtime GE customer, acquired the newest model of the company’s Voluson E10 ultrasound in March. She raved about the system’s ergodynamic capabilities including presets that enable her to switch between 3D and 4D.

She compared using 3D/4D for the first time with getting a new smartphone. The technology is great, but it can be frustrating if you don’t know how to use it. 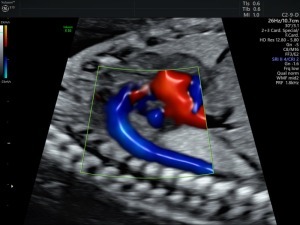 “I have never seen my patients remark as much as they have with this [new system] because I can quickly shift between the different 3D and 4D presets with much more ease, so I can show them things more quickly,” she said.

She spends about 45 minutes to an hour with each patient and the presets save her about 10 to 15 minutes per patient.

Bradley is also excited about GE’s new Radiant Flow technique, which was introduced in the U.S. in the beginning of the year. It can help the user determine if the fetal brain is getting enough blood support, and improves the detection of abnormalities in the fetal heart.

“It is going to probably be a game changer in terms of prenatal diagnosis,” said Bradley. “I’m really looking forward to seeing where the specialty goes with using this.”

She added that the 5D Heart tool has 98 percent sensitivity, 93 percent specificity and 95 percent accuracy for the detection of congenital heart disease.

High BMI population
More than one-third of adults in the U.S. are obese, according to the Centers for Disease Control and Prevention. In the obstetrics field, this patient population is considered to be “technically difficult”.

Patients who are obese during pregnancy are at greater risk of fetal anomalies, which can be missed because they require a degree of penetration that a conventional ultrasound system cannot provide. Some of the major vendors offer more advanced technology for these patients.

Samsung’s S-Vue transducers have a built-in single crystal technology that allows for higher resolution at depth. But it’s through the combination of many of its technologies, that a clinician will achieve good image quality.

“With the transducer, the beam former and the engine architecture of the ultrasound system, and then signal noise reduction and artifact suppression technologies, we have beautiful penetration on high BMI patients,” said Elliott.

Philips’ PureWave transducer technology is another solution that improves penetration at higher frequencies.

A three-site clinical study conducted in Europe evaluated the use of the company’s C9-2 PureWave transducer and found that clinicians were able to complete over 88 percent of their technically difficult patient exams.

Patient engagement matters
With the industry transitioning to value-based care, patient engagement is now more important than ever. What could make a mother happier than receiving 3D images of her baby on her smartphone?

“Women, as well as their partners and extended family, are more involved than ever,” said GE’s Rott. “We have the need to share more with patients and give them more insights during the ultrasound exam.” 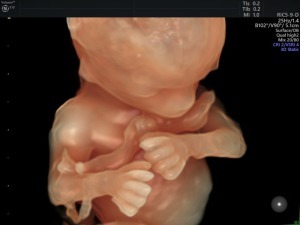 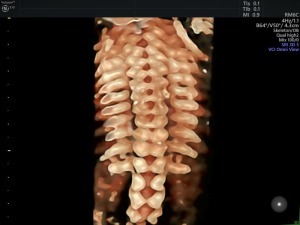 This is an area that GE and Philips focus heavily on. GE partnered with the startup Trice Imaging to develop an application called Tricefy that securely sends images via the cloud to the patient’s smartphone.

The clinician enters the patient’s mobile number and can directly select from the ultrasound system the images to share. The patient then receives a text message with links to those images.

Philips acquired a company called Parenting Plus. Its flagship product is a platform that allows ultrasound images to be securely sent.

“Five to 10 years ago, you got a little printout, but now people want that electronically, so they can post it on social media and send it to grandparents,” said Philips’ Cohen.

3D models of fetuses
The use of 3D printing is fairly well established in the cardiology field, but what about obstetrics? There is a lot of interest there, but it’s not widely used yet.

“You can, on the one side, print [the model] for the patient, but also, if a case is not normal, you can use the 3D print for clinical education or to practice surgery,” said GE’s Rott.

GE’s ultrasound systems can directly process five different industry formats that 3D printing companies and 3D printers require. According to Rott, this was a major feat because those formats are very different from standard ultrasound file formats. 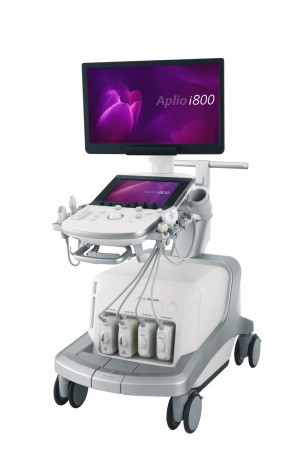 The company worked with a physician in Brazil who performed a few 3D printing experiments on pregnant women who are blind. The models essentially allowed them to “see” their babies.

Canon’s Aplio i800 ultrasound also has this capability. So far, the company only sees value on the consumer side.

“We are looking at clinical value and I haven’t seen any so far, but there is work being done to use [the models] to get a better understanding of anomalies, or if any procedure is being planned,” said Paulo Ucio, senior market development manager at Canon.

Bradley agreed that the entertainment and social aspect is where these 3D-printed models will take off.

“The reality is that we are driven by the consumers,” she said. “If the consumers want it and we can do it safely and provide them with medical diagnostic information as well as a beautiful picture of their baby’s face and a 3D print-out of it, why not do it safely in the hands of people who understand the equipment?”