by Nancy Ryerson, Staff Writer
From using machines that sterilize toxic medical waste, turning it into an innocuous pulp, to dressing fashion models in gowns made of blue wrap, there have never been more innovative ways for a hospital to shrink its environmental footprint.

There have also never been more reasons to make the change. A recent study in the journal Health Affairs estimated that six climate change-related events, including floods, hurricanes and drought between 2000 and 2009 cost about $14 billion in health care expenses and lives lost. More and more health care facilities are looking at environmental sustainability as the next logical response to the oath “first, do no harm.”

If “going green” seems daunting, it helps to use vendors who are on the same sustainable page, experts say. “We know hospitals can’t do it by themselves,” says Janet Brown of Practice Greenhealth, a nonprofit committed to planet-friendly health care. “They require business partners, and we would like them to be seen as that, as partners rather than just vendors.”

Practice Greenhealth helps facilities connect with vendors that practice what they preach. The organization as well as some of its award-winning hospitals and trusted suppliers spoke with DOTmed Business News about creative ways to make small but influential improvements for patients and the planet.

Trash talk
Because there is often so much room for improvement, waste stream management can be a great place for hospitals to start their sustainable programs, Practice Greenhealth suggests. Nationally, hospitals generate around 6,600 pounds of waste per day and 5.9 million tons of waste annually. Much of that waste ends up in a landfill, where it produces methane, or in an incinerator where it emits greenhouse gases, dioxins, HCl gas and other toxic substances. Currently, over 90 percent of potentially infectious medical waste is incinerated, according to the Environmental Protection Agency, but alternative waste management methods are gaining ground.

“On site technology significantly reduces the carbon footprint since there are no trucks hauling medical waste in and out of the community,” says Bill Norton, owner of Red Bag Solutions, which manufactures on-site medical waste processors. Using steam or ozone, the equipment sterilizes medical waste and reduces its volume by 90 percent, leaving waste that can be thrown away as ordinary trash.

Another way to cut back on red bag waste is to ensure that the trash in question is in the right place. According to the EPA, 85 percent of an average hospital’s waste is nonhazardous but much of it is often mistakenly put in red bag containers intended for medical waste. “The biggest issues we see typically fall into three areas: waste segregation, non-compliance and a lack of recycling,” says Kevin Pollack, director of sustainability at Stericycle, a national medical waste management company. “Waste segregation is typically over-classifying solid waste by putting it in the medical waste container; however, we also see improper waste segregation with regards to pharmaceutical waste or pathological waste, which leads to non-compliance.”

“We audit two randomly selected medical waste containers and whichever unit has the most compliant waste for that month, they win the Oscar – Oscar the Grouch,” says Wadhwa. “It’s a fun way to get people engaged.” 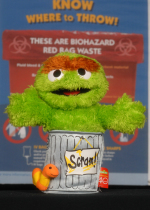 The “Oscar” awarded to the
Inova hospital with the most
compliant trash each month.

Inova also has a creative way of dealing with blue wrap, a sterile packaging that makes up 20 percent of the waste generated in surgical services. It is often discarded in the red bag waste stream, even though it’s not in contact with patients and therefore, not contaminated. In 2011 and 2012, Inova partnered with DC Fashion Week to host Blue Wrap Fashion Design contests open to Inova employees and competitors from around the country. The shows spotlighted the most creatively chic ways to transform the material.

“The purpose is really to propagate what we’re doing in our community,” says Wadhwa. Of course, the majority of the system’s blue wrap does not go towards snazzy outfits; it’s recycled. 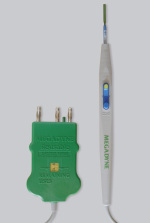 Operating room adjustments
Operating rooms account for about 33 percent of all hospital supply costs, according to a November 2012 report from the Commonwealth Fund. Practice Greenhealth has an initiative called “Greening the OR” which 201 hospitals and health care facilities have endorsed as of April 2012.

Several companies offer solutions that help ORs cut down on waste, such as replacing single-use items with reusable ones. For example, single-use liquid-proof surgical gowns and drapes are often made of a material that takes 400 years to decompose in a landfill. The company Lac-Mac, a Practice Greenhealth supplier, offers surgical gowns and drapes that can be re-used and re-processed 75 to 125 times after being cleaned by a commercial laundry.

“Greening” electrosurgery techniques can also considerably cut down on waste. Megadyne provides reusable electrosurgical pencils and patient return electrodes that the company says can offset about 90 percent of a facility’s electrosurgical trash.

“It’s because usually, not only do you have a pencil and a tip and a sticky pad in the case, they’re also wrapped up, typically inside of another container, which is typically inside of another container,” says Melissa Fischer, marketing manager at Megadyne. “You end up with all of this plastic trash that may or may not get recycled depending on the hospital’s policies.”

Other simple switches include using re-usable sharps containers provided by companies like Stericycle, an improvement that can save the industry $5.4 billion over five years, according to the Commonwealth Fund. The Commonwealth Fund report also recommends taking a look at surgical packs — prepackaged supplies formulated for specific surgical procedures. Hospitals identified items in the packs that were often thrown away without being used and asked suppliers to not include those items in the future. The hospitals saved $4.33 per procedure in the first year of making those requests, and $22.66 per procedure after five years.

The Xenex system. Courtesy of Xenex.

Cutting back on chemicals
Reducing chemicals can also help patient health and the environment, as many are linked to health risks such as asthma and neurological disabilities in children. Potentially toxic chemicals can be found throughout a hospital, in places as unsuspecting as patient mattresses and operating room table pads. Those surfaces often contain dangerous chemicals, such as brominated flame retardants, which can leach out of the materials and accumulate in the body.

“In a hospital environment, mattresses and other surfaces are the number one element that patients are in continual contact with during their entire length of stay,” says Rick Conely, sustainability expert and capital acquisition manager at Sizewise, a company that manufactures mattresses, operating pads and stretcher pads.

LDI Solutions, a manufacturer of plastic and textile products, has eliminated the use of PVC from its products because of the emissions they release leached in a landfill. PVC contains DEHP, a phthalate plasticizer linked with reproductive birth defects.

Chemicals used when disinfecting can also be dangerous, but cleanup can be one of the toughest processes to attempt without them.

“When you think about a green disinfectant, it’s almost a contradiction of terms,” says Mark Stibich, founder and chief scientific officer of Xenex. The company’s device produces germicidal ultraviolet light, which is able to penetrate through a cell wall, bacterial spore or virus and damage its DNA. Unlike previously used techniques, the method does not use mercury, and it allows a facility to cut back on its use of disposable wipes and mops, Stibich says.

As for cleaning products, Practice Greenhealth recommends choosing ones that have been “certified” environmentally preferable by a third party. GreenSeal and EcoLogo are the most prominent cleaning product certification programs.

How to make changes that stick
Even though many hospitals have implemented sustainable improvements, there is, of course, more work to be done.

“There is never a shortage of sustainability ideas, but there are always a limited number of resources to help drive the ideas to fruition,” says Pollack of Stericycle. “Based on these challenges, the interest in sustainability is widespread, but there is still a limited, albeit growing, number of hospitals who are successfully implementing sustainability programs into their operations.”

Janet Brown of Practice Greenhealth agrees that while facilities may show pockets of success, like in recycling or energy use, hospitals that are strong in several areas are less common. She calls for further involvement from the top to continue moving facilities forward.

“Sometimes it feels like we’re moving at a snail’s pace, but because I’ve had so many years invested in it, I can step back and see that we’ve really made progress,” says Brown. “For me personally, I think the biggest change is that more and more we’re seeing greening activities moving beyond grassroots and departmental programs, beyond the passionate individuals that make it happen because they care about it, to engaged leadership making the top-down strategy work. The difference is everything.”