World ultrasound sales to grow 29 percent over next 5 years

by Brendon Nafziger, DOTmed News Associate Editor
World ultrasound sales will grow 29 percent over the next five years, with the Asia Pacific region enjoying the strongest growth, according to InMedica's latest predictions.

In a market report teaser released Tuesday, the IHS Inc. subsidiary and research group said revenues in the Asia Pacific region would grow 43 percent, while only between 15 and 26 percent in Europe, the Middle East, Africa and the Americas.

Even though sales will grow, actual unit shipments will drop, the firm predicted. This is because emerging markets are switching from cheaper black-and-white systems to costlier color ones, a trend InMedica said is already evident in China. 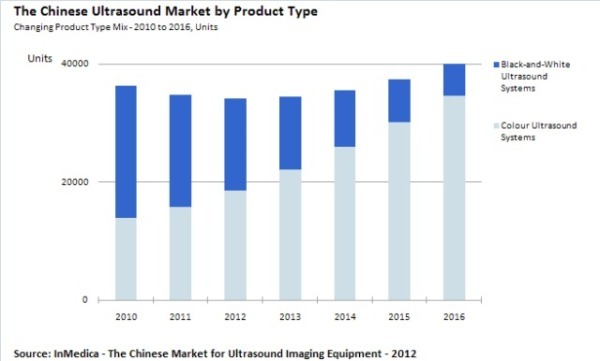 However, last year sales had been down in Japan, the second largest ultrasound market in Asia, in part because of the financial pinch caused by a troubled economy and the March earthquake and tsunami.

The report is The World Market for Ultrasound Imaging Equipment-2012.